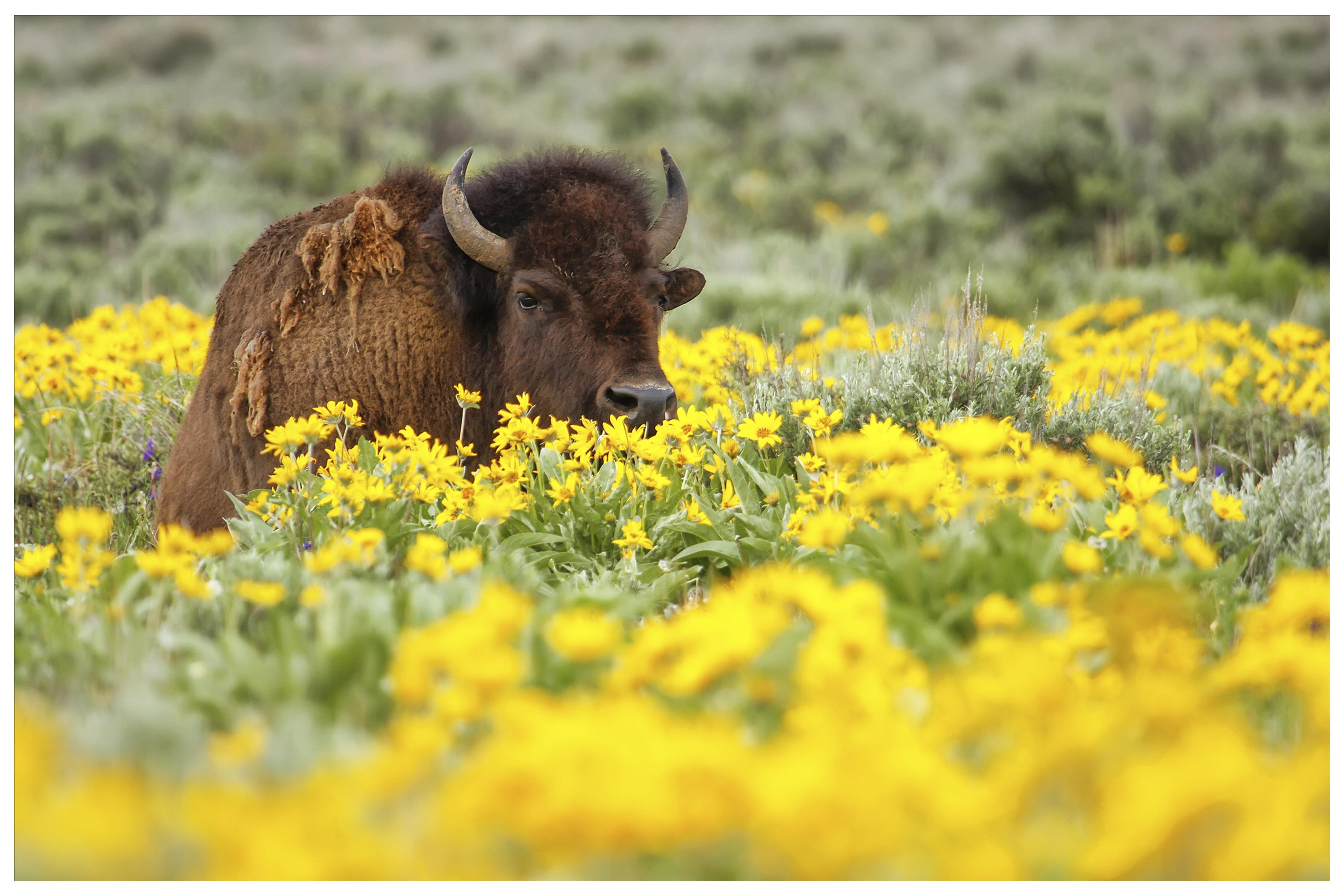 Spring is here, and needless to say so is the need to get some fresh air, exercise, and peace of mind. Wildlife watching in Yellowstone is superb in the spring, with baby animals playfully bounding around, their mamas happy that the long winter has ended. As the park continues to open up and we continue the COVID recovery, we want to whet your appetite for the animals that you will still be able to see as you visit, even if it's not in March or April as initially planned.

Sixty-seven different mammals live in Yellowstone National Park. Some, like the wolverine and Canada Lynx, are rarely seen but enjoy the vast expanse of undisturbed habitat. Elk, mule deer, bison, moose, bighorn sheep, and pronghorn are all abundant, along with cougar, coyote, bear, gray wolf, fox, and river otter (to name but a few.) We've outlined the animals you are most likely to see (keep in mind, these animals indeed are wild, so there are no guarantees!)

Early morning and late evening are the best times of day for wildlife watching when the animals are most active. (And we mean EARLY morning; you'll want to be out before dawn.)

Yellowstone is one of the few areas south of Canada where black bears co-exist with grizzly bears. They are usually solitary, except for mating season in the spring. Black bears have delayed implantation and give birth to 2-3 cubs in the winter. They hibernate November through March, the females become semiconscious while giving birth, then going back to sleep while the cubs nurse and sleep. Black bears can live to be 15-30 years old. Ironically, only 50% are black; the others are brown, blonde, and cinnamon-colored. Black bears are often spotted in the Tower and Mammoth areas of the park.

Grizzly bears look much different from black bears; they are one ½-2 times larger with a large muscle mass over their shoulders, a concave face, and are much more aggressive.

The Greater Yellowstone Ecosystem (which includes parts of Montana, Idaho, and Wyoming) and Northwest Montana are the only areas south of Canada with large populations of grizzly bears. In 2019, there were 728 counted in the greater Yellowstone area. You'll find them in the Hayden and Lamar valleys on the north slopes of Mt Washburn and around the Fishing Bridge at the East entrance. 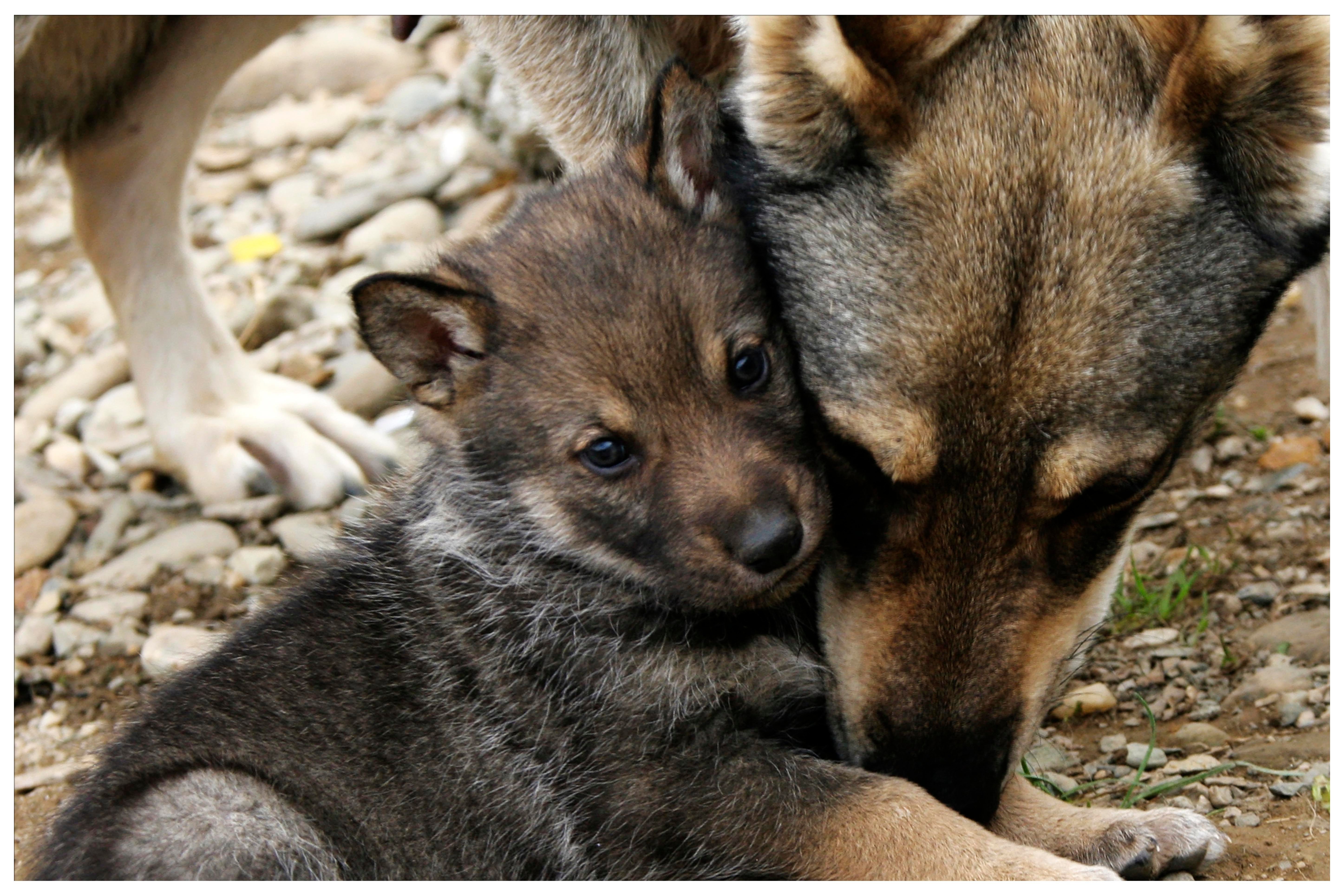 This illustrious creature disappeared from Yellowstone through the loss of habitat and extermination programs in the early 1900s. From 1995-1997, 41 wild wolves from Canada and northwest Montana were released into Yellowstone. As of January 2020, 94 wolves are living in the park in 8 different packs.

In 2015, there were an estimated 528 living in the Greater Yellowstone Ecosystem. However, wolves generally don't live long. The average age of wolves residing outside of the park is 2-3 years, wolves living within the park, 4-5 years. Their leading cause of death is other wolves, fighting over territory or carcasses.

Females give birth to an average of 5 pups, born in April. They emerge from the den after 10-14 days but will continue to live there for 3-10 weeks after birth. 90% of wolves winter prey is elk, 10-15% of their summer prey is deer, but they will also kill bison. If you spot a wolf pack, they may be feeding on a carcass.

Coyotes are smaller than wolves, roughly one-third the size. The most distinguishing thing about the coyote is their long-range of communicating; you'll hear them howling either in groups or as individuals. Not as elusive as the wolf, the coyote can quickly learn bad habits such as eating human food. 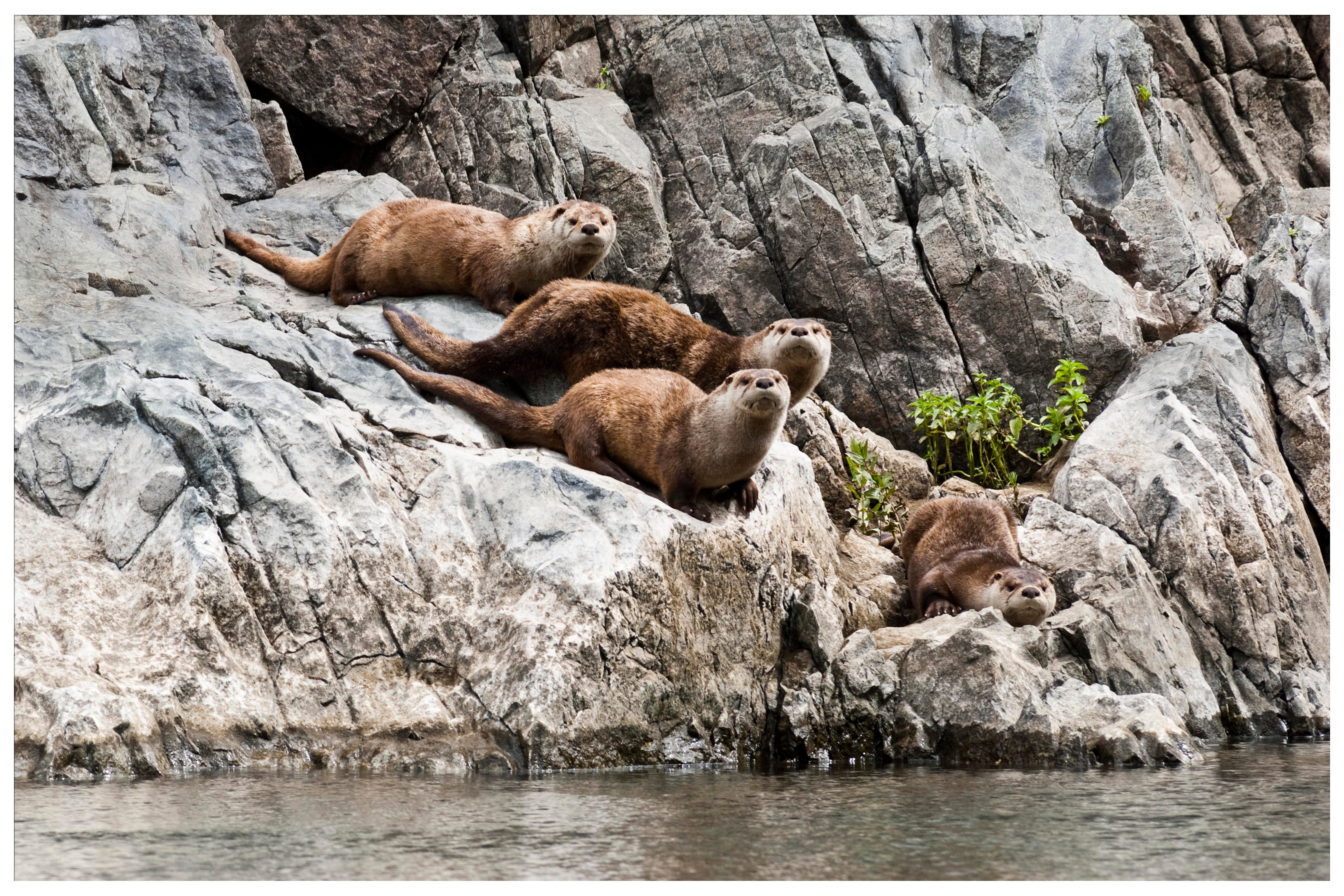 Some of the cutest and most playful animals to watch are part of the weasel family, the river otters. It's easy to spot them in the winter when their dark coat contrasts with the snow. They play alone, with each other and with other animals! River otters can swim underwater for 2-3 minutes at a time; they have a waterproof pelt, and their ears and nostrils close underwater.

They can move up to 15 mph in the winter, by alternating hops and sliding across the snow and ice. They mate in March or April, and the offspring stay with the mother until the next litter the following year. Their heavy tails drag along, so if you see a unique set of tracks, they are probably from a river otter.

Yellowstone National Park is the only place in the United States where bison have lived continuously since prehistoric times. However, by 1902, poachers had reduced the numbers in the park to just two dozen animals. The U.S. Army stepped in to protect the animals from further poaching. Today, Yellowstone is home to the nation's largest bison population on public land; in 2019, there were 4,829 counted.

Bison live in groups. In the winter, they average about 20, jumping to 200 in the summer, and up to 1000 during the rut (mating season) in July and August. There are two herds in Yellowstone, northern, in the Lamar Valley and Central in the Pelican and Hayden Valleys. The central herd survives brutal winters where temperatures can get to -44 degrees Fahrenheit. However, some of this herd has started moving north and mixing with the northern herd. 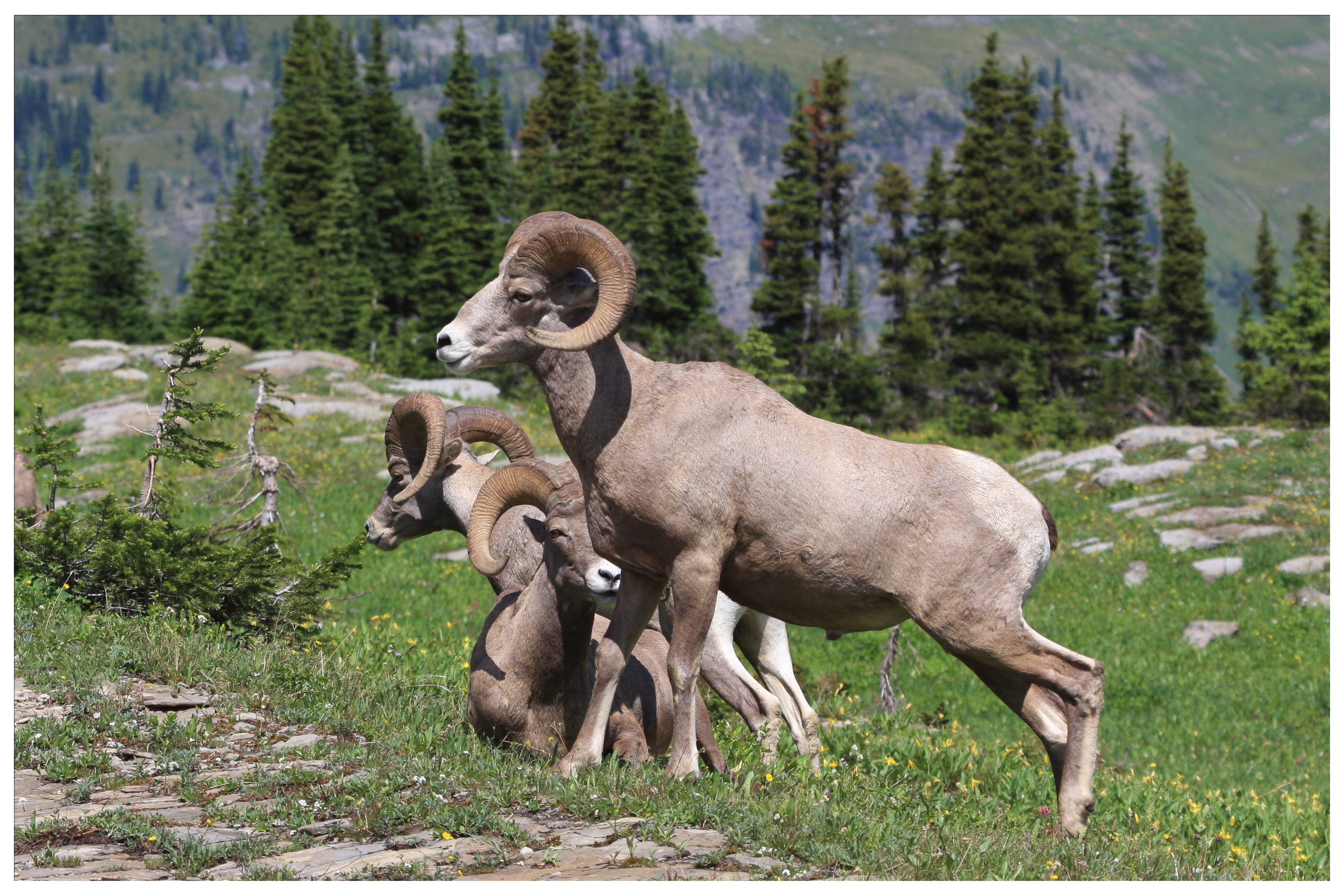 The large horns of the bighorn play a significant role in the ram's life. Horn size can influence dominance and rank, and rams often fight to establish dominance during mating season with other rams of equal horn size. Ram skulls have two layers of bone above their brain to act as a shock absorber. The sheep eat mainly grasses so that they can be found on the slopes of Mount Washburn and along Dunraven Pass during the summer. Year-round, you'll find them in the Gardner Canyon between Mammoth and the north entrance and the cliffs along the Yellowstone River.

Elk are the most abundant mammal in the park, known for their massive antlers. A typical rack can grow to be 55-60" long, just under 6' wide, and can weigh 30 pounds per pair. Each spring, they drop their rack, and new growth begins. The last half of the growth period is the most rapid; mature bulls can grow up to 2/3" of new antlers per day!

When elk retain their antlers, they stay at the top of the social structure, gaining preference to mates and feeding sites. A male elk can reach 5' tall and weigh 700 pounds. You'll find them casually grazing around the north entrance at Gardiner.

While we continue to plan our escape in the coming weeks, and Yellowstone opens up to the public, keep in mind that social distancing, as well as respectful distances from animals, will be among the top priorities of the late spring and early summer. We encourage you to go out and seek your adventure, but be safe while you do it.

When the open road calls, Bozeman is the perfect spot to follow its siren song. Whichever route you...
Read More

Summer arrived with the Solstice this year. The days suddenly seem long and warm. That free...
Read More