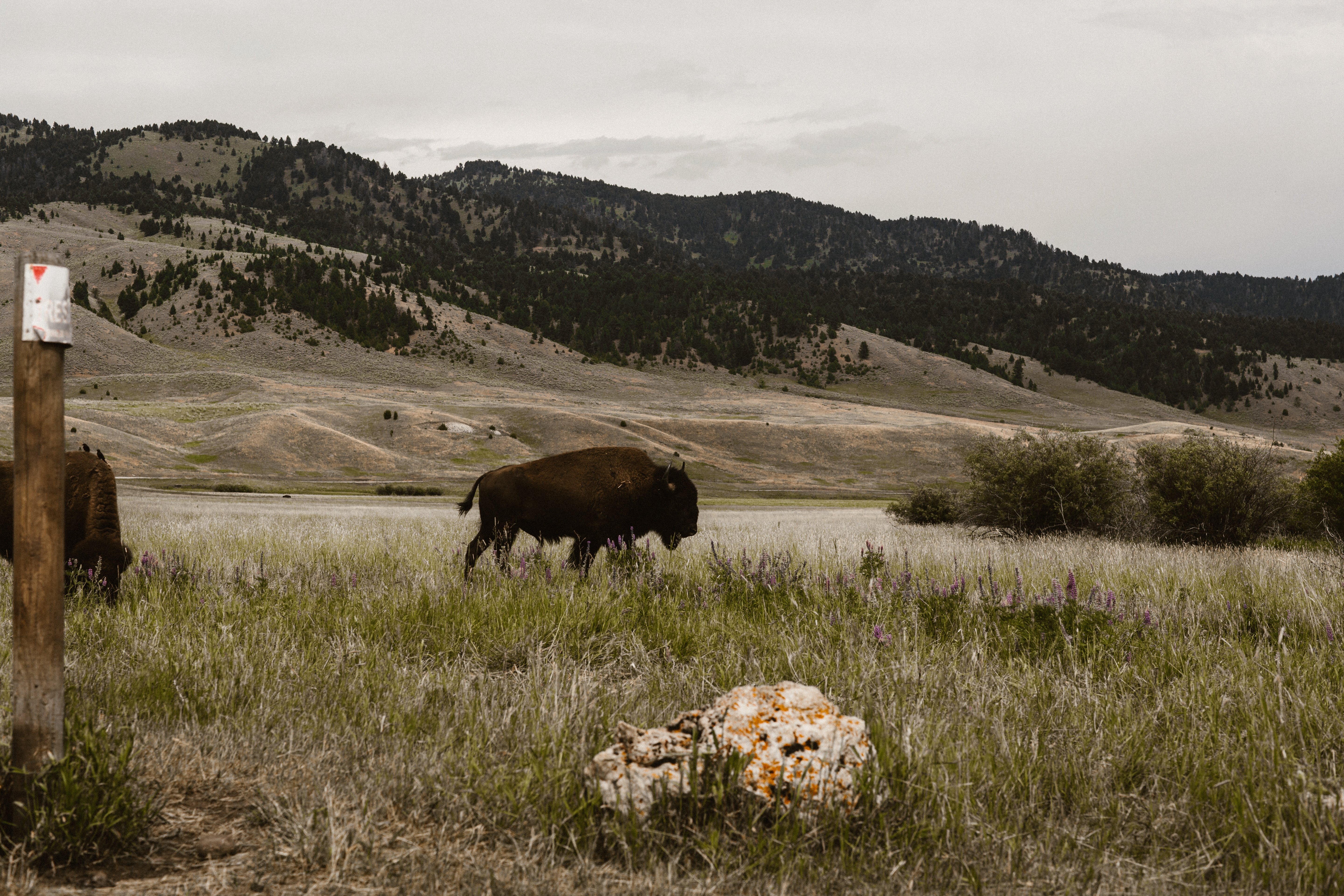 Yellowstone Wildlife In The Fall

Serious wildlife watchers consider autumn one of the most exciting times in Yellowstone National Park. Activity increases as animals prepare for winter and for some, mating season begins bringing with it some interesting mating rituals. Many species start moving to lower elevations as the temperatures cool. Not to mention, the fall colors are amazing; a perfect backdrop for the photographers out there. Wildlife can be found throughout the park, but the Northern Range, from Gardiner to Cooke City is considered the best areas for wildlife watching. It’s also the only road that stays open year round. There are 67 species of mammals in the park; we’ve listed the most prevalent, but keep your eyes open, you may come across others such as pronghorn, beavers, deer and maybe even the elusive cougar. Two species of bear live in Yellowstone, the black bear and the grizzly. They are easy to differentiate by the grizzly’s large hump. They are quite active foraging during the fall, beginning to prepare for the long winter sleep. From 1910 to the 1960’s, rangers allowed people to feed bears, which unfortunately caused them to become comfortable with humans. Today, this practice is strictly prohibited. Bears will enter campgrounds and picnic areas in search of food. When viewing bear, it is advised to stay in your car, or at least stay 100 yards away.

The Northern Range is home to 10,000-20,000 elk, depending on the year. The most interesting time to view them is during the mating season, called the “rut,” which takes place through mid-October. Bull elk have a high pitched bugle to bring in females. It will sometimes bring in other elk and occasionally a battle will ensue over the females. Fortunately, serious injury rarely occurs. Many travelers are surprised at the elk who populate Mammoth Hot Springs, casually grazing throughout the area.

Best viewing: Gardner Canyon between Mammoth and the North Entrance; cliffs along the Yellowstone River opposite Calcite Springs; above Soda Butte

Big Horn Sheep prefer high elevations and rocky cliffs so hiking gives you the best chance at seeing them. The size of their impressive horns affects the dominance and social relationships with other sheep. Because of their head-on collision battles, the rams have two layers of bone above the brain to serve as a shock absorber.

Yellowstone has the densest population in North America, in particular the Northern Range, which is known as one of the best places in the world for viewing. The wolf population was restored in 1995. As of December 2016, there were eleven packs, totaling 108 wolves. Wolves prey mainly on bison and elk and are often seen feeding on carcasses. However, the leading cause of wolf deaths is other wolves. They are most active in early morning and late evening; early birds definitely have a better chance of a sighting! 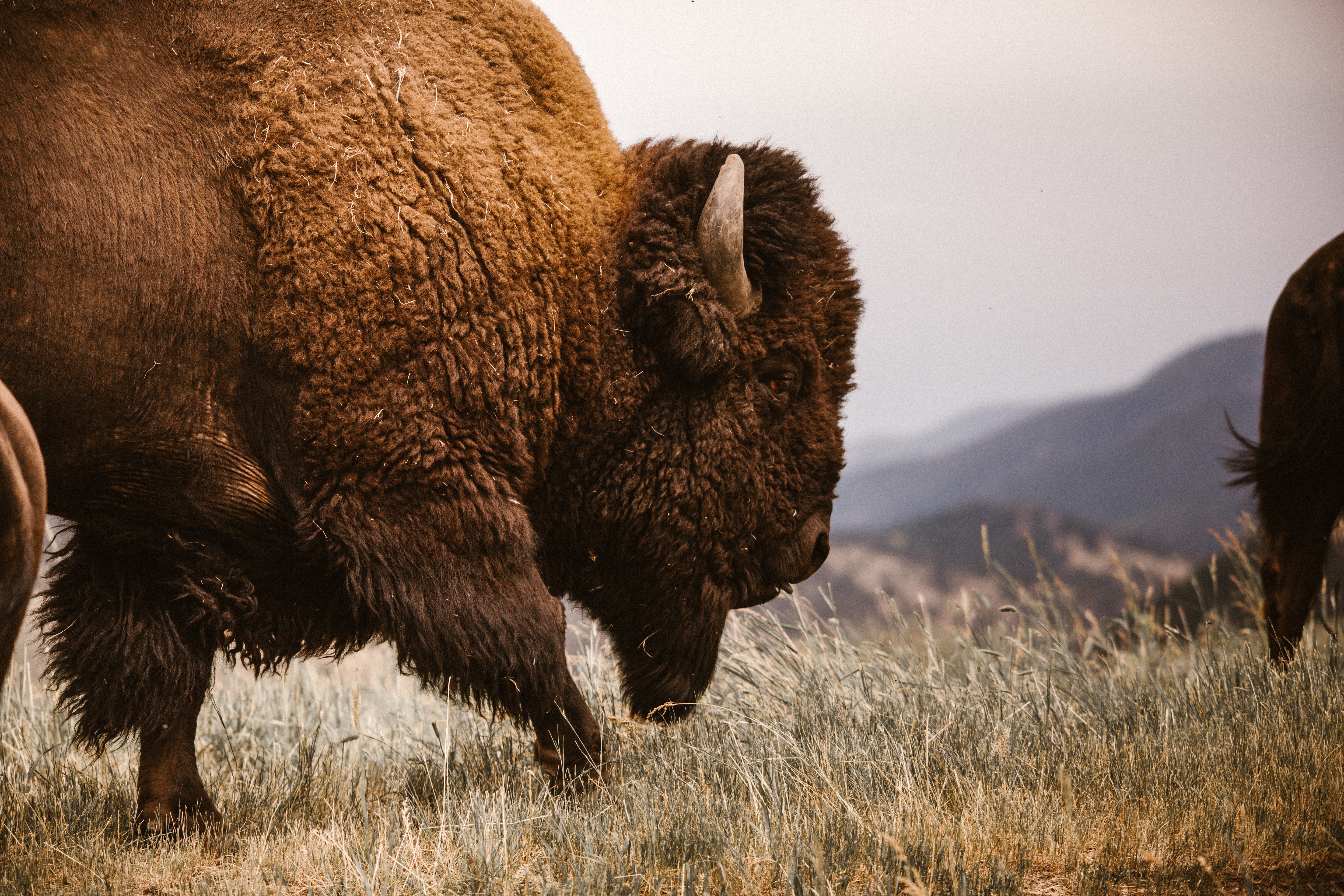 Best viewing: Hayden and Lamar Valleys. During winter, they are mainly located in the hydrothermal areas along the Madison River, Blacktail Deer Plateau, Tower-Roosevelt and Gardner Basin.

Yellowstone is the only place in the United States where bison have continuously lived since pre-historic times. Informally known as buffalo, these grand animals can be seen throughout the park. It’s likely you will run into a traffic jam caused by the slow-moving animals that are well-adjusted to people. Again, don’t get too close, the large animals can run fast and will chase humans.

The moose population in Yellowstone has declined to fewer than 200 animals. These quiet, elusive animals are usually found alone or in small family groups. The mating season runs late September to early October, so they may be more active during this time. Moose can live up to 20 years old, longer than most animals. While they may seem docile, they are easily riled and will chase humans, particularly a mother and calf.

Always keep in mind that the animals are truly wild. Stay 100 yards from bear and wolves and 25 yards from other animals. Never feed an animal.

3 Ways to Explore Yellowstone in the Winter

There is no doubt about it, Yellowstone National Park is an incredible place to visit any time of...
Read More

How to Prepare for Your Visit to Bozeman in Winter 2021

So, you want to visit Bozeman this winter, and we know why. Between countless outdoor recreation...
Read More