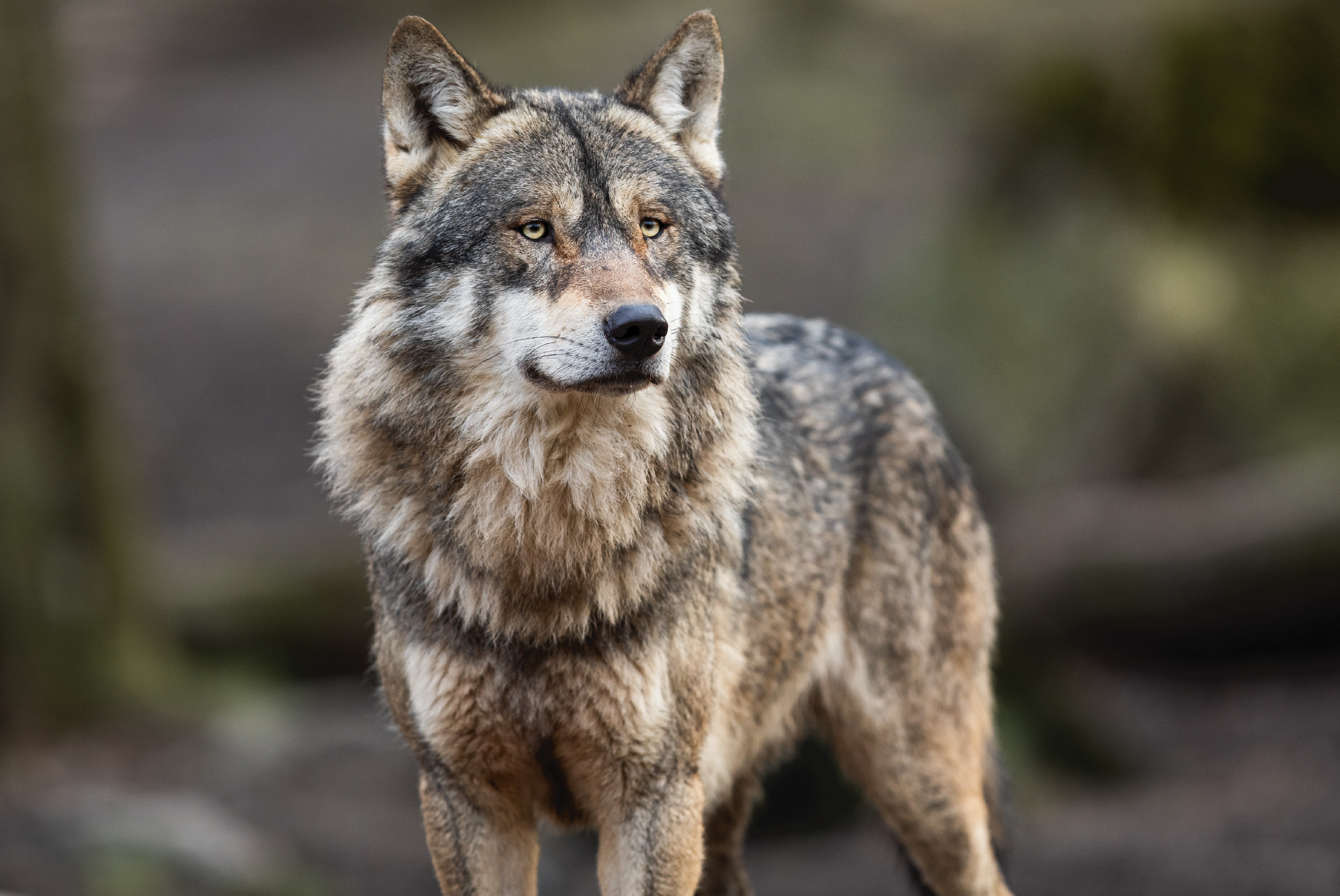 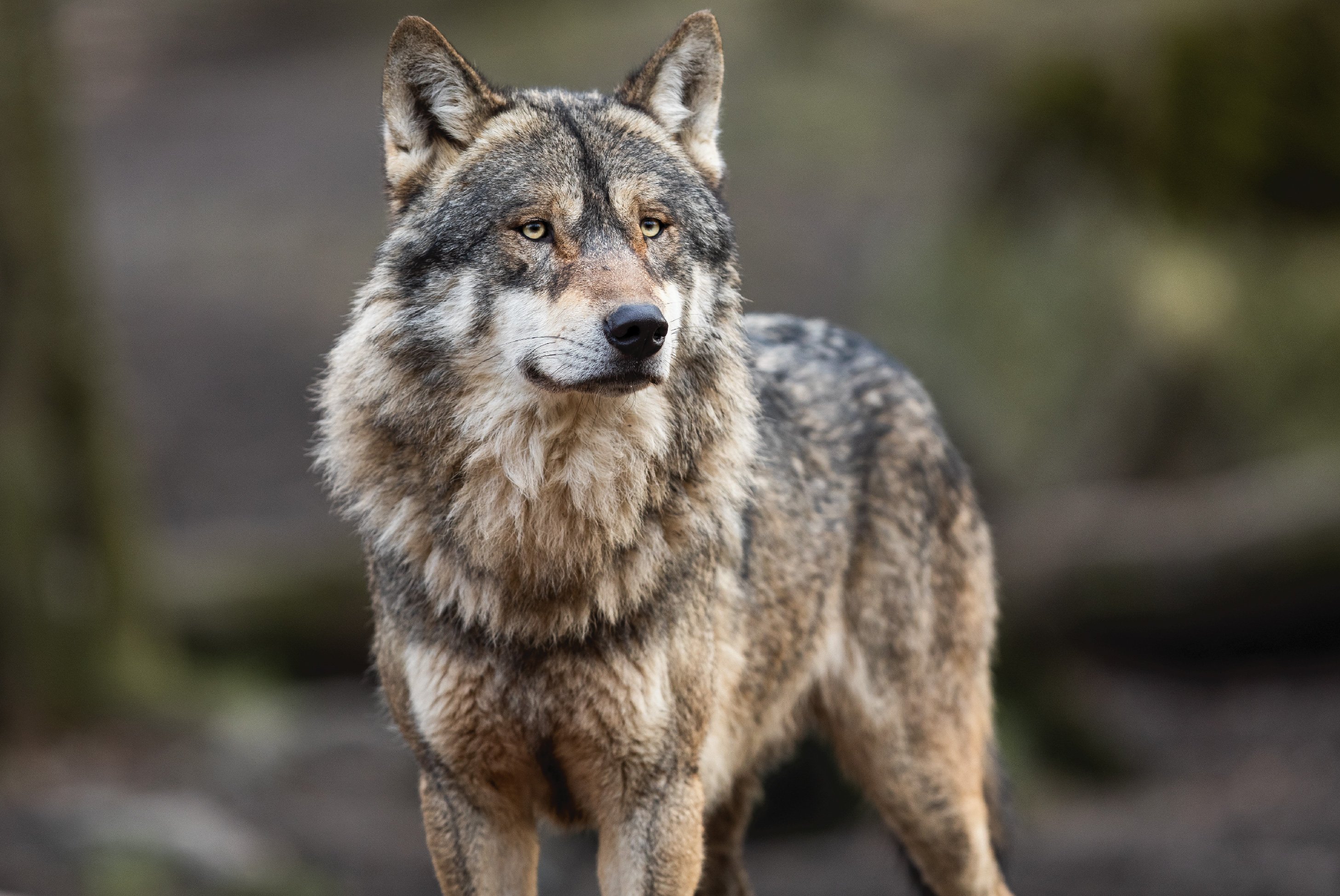 Yellowstone National Park draws visitors from all over the world – in part because of its diverse and iconic wildlife. While most people know Yellowstone for its bison, there are nearly 300 species of birds, 16 species of fish, five species of amphibians, six species of reptiles, and 67 species of mammals – including seven native ungulate species and two bear species. It’s a magical place to see animals you may not see anywhere else, with such a massive swath of protected land for them to roam in.

When you visit in search of some wildlife viewing, just remember that Yellowstone is their home – not yours. Always keep your distance from any wildlife in the park. It is illegal to willfully remain near or approach wildlife, including birds, within any distance that disturbs or displaces the animal. Instead, respectfully observe from a distance and bring binoculars if you want to get a closer look.

Here are just a few of the coolest animals in Yellowstone you’ll find, and fun facts that make each of them unique. 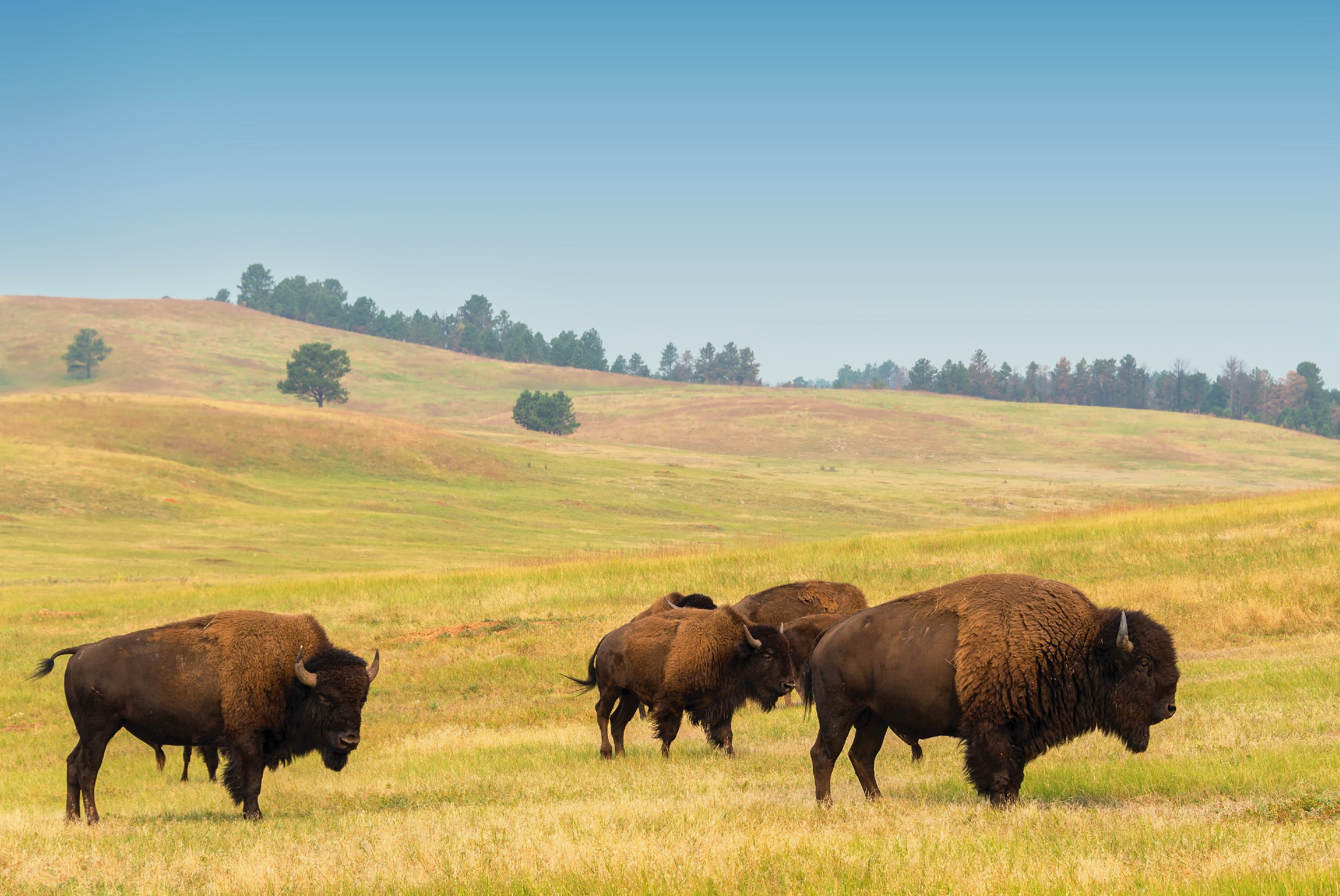 A bison is the iconic Yellowstone animal – it may as well be the park’s mascot. Yellowstone National Park is the only place in the U.S. where bison have continuously lived since prehistoric times when millions of bison roamed the continent. They look like dark brown fluffy cows, and while they may look cuddly enough to pet, they’re known to charge visitors who get too close. At up to 2,000 pounds and 6 feet, tall they’re not an animal you want to mess with! While people often use the terms “bison” and “buffalo” interchangeably, the scientific name in North America is bison. You’ll often see them roaming slowly in herds in grassy areas (they eat grass), and in the springtime, you might be lucky enough to spot them with a few red-haired, baby calves. 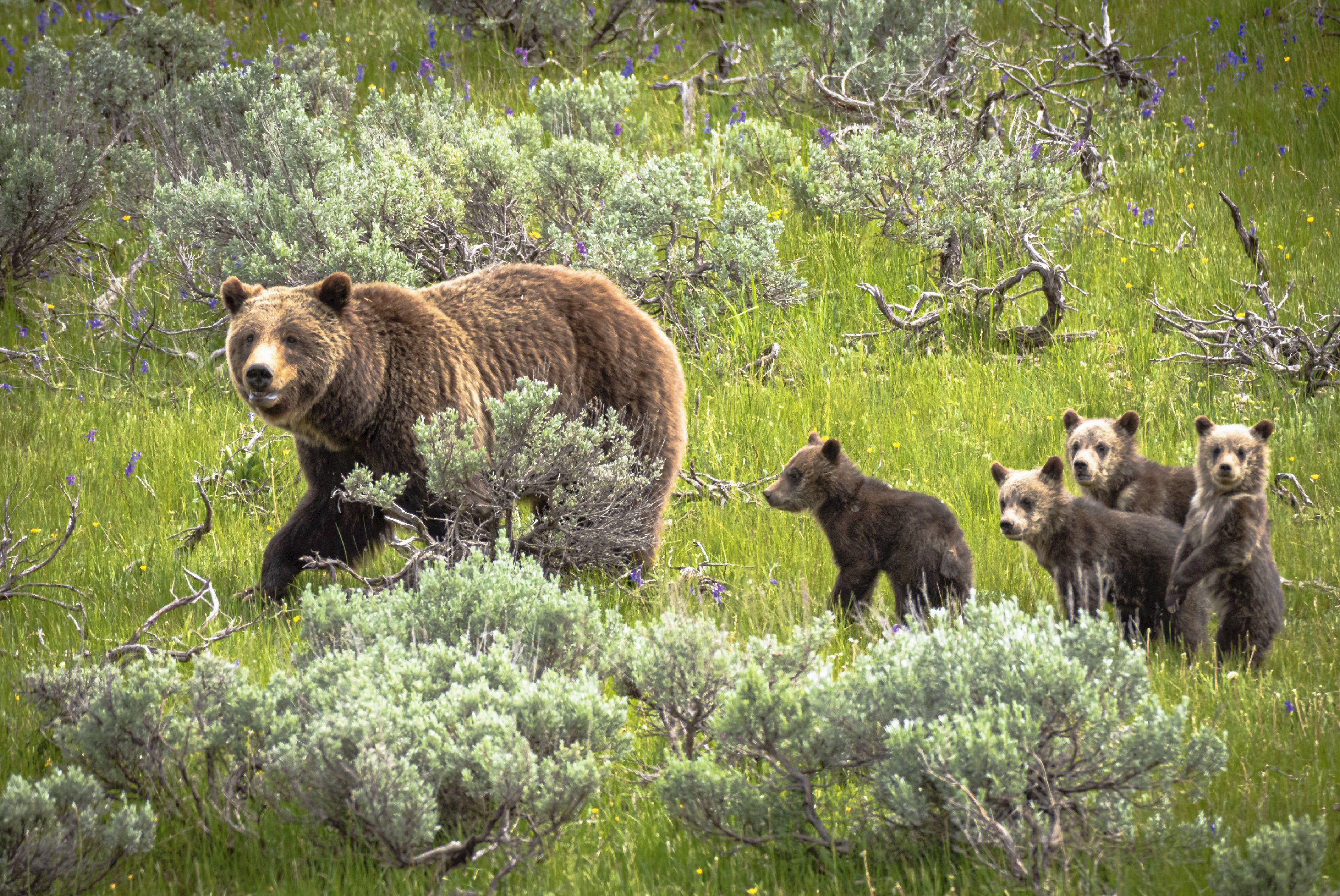 Within the Greater Yellowstone Ecosystem, it’s estimated that there are about 728 grizzly bears at this time. The Yellowstone area is one of the two south of Canada that have large grizzly bear populations, making it a unique environment and a focus for conservation. Grizzlies can weigh up to 700 pounds and, during autumn, they gain around 3 pounds per day in preparation for winter hibernation. They emerge in the spring, spotted in the Hayden and Lamar valleys at dawn and dusk throughout the rest of the year. They’re generally solitary and can be spotted along the roads or in the wild. Due to their aggressive behavior, especially when human food is involved, it’s best to keep a lot of distance and always pack out your food. To learn more about bear safety in the park, visit the park’s website.

Majestic gray wolves have made an incredible comeback in the last 20 years after they were eradicated from the area in the early 1900s. In the 1990s, 41 wolves were released into the Yellowstone area. As of January 2020, there are at least 94 wolves in the park observed in 8 packs. They’re highly social animals and travel in packs, cooperating to raise their young and hunt large prey such as elk, deer and bison. The largest of the dog family, gray wolves are known for their distinctive howl and other communications that include barking and growling. They can be found in most areas of the park, especially at dawn and dusk. 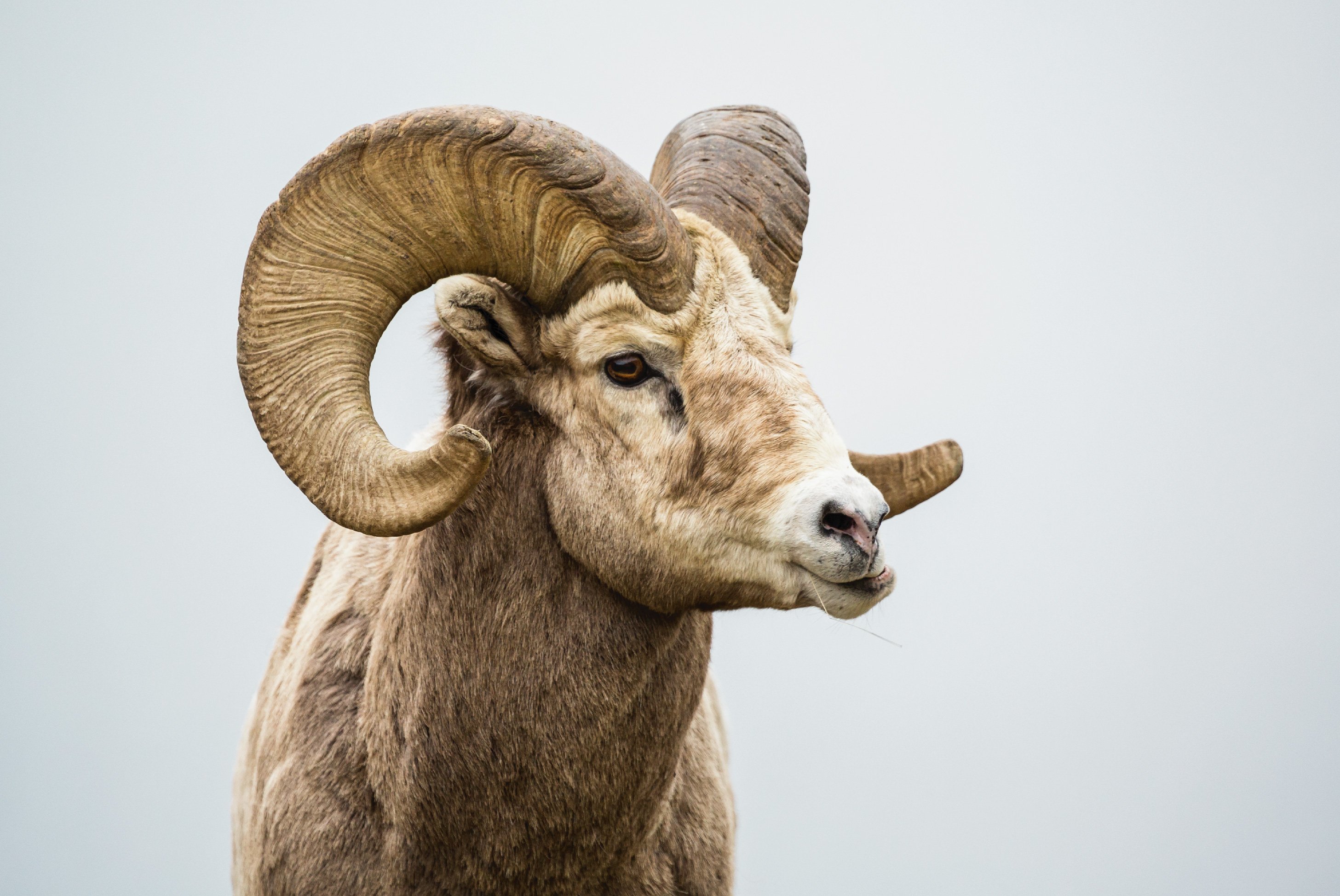 Bighorn sheep are marked by their impressive, curled horns. But their horns are more than fashionable crowns – they’re a symbol of rank, with larger horns commanding more authority. Male horns can weigh as much as 30 pounds (now that’s a strong neck). They travel in herds and like to hang out near foothills and rocky bluffs, often blending in with their surroundings. Their split hooves allow them amazing balance, so they can scramble easily on rugged mountain terrain. They’re known to engage in head-to-head combat to show who’s boss, which is why their horns are so important.

These beautiful cats are incredibly elusive and rarely seen, so consider yourself lucky if you happen to spot one in the park! They have short tails and ear tufts, and black rings around their tales. Like most cats, they’re incredibly agile, hunting a variety of rodents and birds, and even take down deer and pronghorn from time to time. Bobcats are generally solitary and oversee their own territories, which can be up to 40 square miles. They’re so cool, Montana State University in Bozeman decided to elect them their mascot.

Ready to look for wildlife in Yellowstone? Check out our blog on planning the perfect day trip to Yellowstone from Bozeman.

Whether you’re an Instagram influencer, a photography hobbyist, or anyone with a smartphone...
Read More

Getting to Bozeman from New York

Looking to get away from the Big Apple for a little while? A vacation getaway to Bozeman, Montana...
Read More

7 Life Changing Things To Do In Yellowstone

Yellowstone National Park is an amazing place. There is no doubt about it. When Teddy Roosevelt...
Read More